A Day From Hell

I completely understand why so many people hate Monday's - I had an awful Monday today. Sorry this post is going to be me complaining about my day so if you prefer not to listen to me bitch, you can stop reading at anytime :)

It all started yesterday when I woke up. I had a bad tooth ache but didn't think to much about it. I was just at the dentist a couple months ago and got a good report, no cavities or anything. So, I thought maybe my gums were just a little irritated or something. By 9:00 last night my right side of my mouth was throbbing in pain. I took a couple Advil and went to bed. I was up most of the night in pain and no medication was helping me. I called the only Dentist in our insurance network this morning at 6:30 and and talked to the emergency line. They said they would call me by 8:00. Well, no call so i called them. They informed me their computers were down and would call me as soon as they could get their schedules set. It was 9:30 and I still hadn't heard from them so I called back. Imagine that, their computers were back up and running and they forgot to call me. They couldn't get me in today but they could squeeze me in first thing tomorrow morning. By this point, I was in tears because the pain was so bad. I got frustrated with the lady and told her I would find another Dentist that would take me right away. I bit my tongue because they are the only dentist our insurance covers - so looks like I'll be paying for this "emergency" service. I called another Dentist office and they could get me in at 12:30. That was better than tomorrow so I booked the appointment.

I was now running late and Allie had her mental health therapy at 10:00. We hopped in the car and drove like the dickens to her appointment. We were late (being late is my pet peeve). The last place I felt like being was in Allie's mental health therapy. I was already frustrated about my tooth and not being able to get into the Dentist first thing this morning and now the pain was almost unbearable. The Therapist kept asking me if I was going to be okay - I felt like an idiot but my mouth really hurt. Many of you know me and I have a very high tolerance for pain. I very seldom complain about pain but this was almost as bad as having a baby!! After Allie's appointment, I came home and took more Advil - unfortunately it wasn't helping the pain at all.

Matt came home at 12:15 to watch the girls and I high tailed it to the Dentist. They took me right away and I was there for 2 1/2 hours.  After many X-ray, we figured out what tooth was the problem.  The only quick solution was to do a partial root canal and then come back in a couple weeks and have a full root canal.  Once he said the word root canal, I was a nervous wreck.  I asked right away if I could be gassed so I was at least a little bit calm.  Let's just say I was more than "happy" after a couple minutes of breathing the laughing gas.  Half way through the procedure, I had to ask them to turn the gas down because every time I closed my eyes I was spinning and feeling like I was falling out of the chair.  I wasn't worried at all about what they were doing to my tooth - it was actually kind of nice.  Everything went really well and I was out of there in 2 1/2 hours.  My tooth was infected too so now I'm on antibiotics and Advil/Tylenol for the pain.  I feel so much better now that the pain is gone.

Apria was suppose to come to the house with Allie's new pump this afternoon.  Finally at 4:00 pm, I called the Marshfield office to see if they were still coming.  When I talked to our representative, he acted like he didn't even know he was suppose to be here.  I was so irritate with him and I was already having an awful Monday.  He said he had a really busy week and didn't know when he could get here.  I used my voice again and told him I expected to see him tomorrow morning with Allie's new medical equipment.  I told him I wasn't waiting any longer and if he didn't come here tomorrow morning, I was driving there.  Seriously.....what the heck is wrong with this medical supply company????  I know they are only human, but they were adding to my awful Monday and I wasn't very happy!!

I decided to call Dr. Brown's office to see if they received any results on Allie's stool test.  The nurse called me back and said they did have results.  She said that everything looked normal except for the fat content in her stool.  I asked her what we have to do about that and what it all means.  She said she would have to talk to Dr. Brown and get back to me tomorrow morning.  From my research on-line, high fat content in poop means that your body is not absorbing all of the nutrients she is eating.  This could be related to her pancreas not working properly or even Celiac disease.  I am very anxious to see what Dr. Brown has to say about this.  Of course I have mixed emotions because for once they found something but I'm not sure it's a good thing.  I'm a bit surprised they didn't find any bacteria in her stool because Dr. Brown was pretty sure she had C. Diff.  Since she doesn't, we are going to have to still figure out why her stools aren't normal and why she is is sleeping 4 or more hours for her nap.  The sleeping part is really starting to bother me because it's just not like Allie to be sleeping so much.  Hopefully we can get to the bottom of that real soon.

Since it was such an awful day with rushing here and there and me not feeling well, Allie didn't receive any of her feedings.  I know - that's very bad of me but I broke the rules and let her have her milk in the van while driving to our appointments, etc.  She drank a total of 8 oz of milk throughout the day.  When Matt got home from work we decided to go for pizza at a fun place for the kids.  Since Allie hadn't eaten anything all day and only drank a little milk, we figured she would pig out since pizza is one of her favorite things (when she does eat).  Not quite - she only had 3 bites of pizza and 2 sips of water.  Disappointing no doubt but 3 bites is better than 0.

Sorry for all the venting but I feel much better now. I'm ready to call it a day, crawl into bed and face a new day tomorrow!

I'll end with a couple pictures of the girls.....they always put a smile on my face. 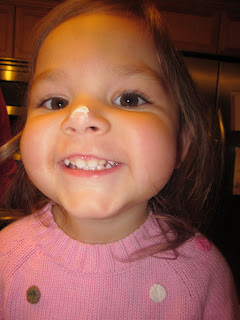 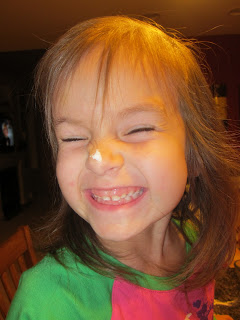 Allie is currently g-tube fed because of her refusal to eat. She has every ability to eat orally but refuses. As of today, the doctors are not able to diagnose Allie and they have no idea why she will not eat.


Update 6/24/11: We are attempting our first tube wean for Allie. We are doing it on our own and have stopped all of her tube feeds cold turkey. Her feedings stopped on June 24, 2011. I will be keeping her blog updated with her tube weaning status.


Update 5/24/11: We have done an oral corn trial with Allie for a month and there has been no signs of a corn allergy. Dr. Edmonson has confimred that Allie's patch allergy test provided a false positive result. With this, Allie is now able to eat corn products. We started Allie on a blenderized diet and removed enteral formula from her feeds. Allie has been vomit free since January 2011. Allie is doing amazing and is finally gaining weight.

Update 12/22/10: Allie was diagnosed with a severe allergy (Type IV delayed reaction) to corn and a gluten sensitivity. All of Allie's milk we have been feeding her through her tube has corn in it. According to our ENT doctor, this severe corn allergy could have caused enough damage to her GI track that it has forced Allie to not eat. We are now working on getting Allie corn and gluten free and seeing what happens. In my heart, I do not feel this is Allie's underlying problem but time will tell.

Our journey with Allie has been challenging, mentally draining, frustrating and yet full of joy, excitement and love. We wouldn't want it any other way.

Thank you for following Allie's journey and we hope one day we can post that she is tube free!!